You may have already forgotten about Halloween, but the recent discovery of a new social organization of body-snatching parasites might be enough to send shivers down your spine!

Trematodes are a clade of worms that are almost exclusively parasites of snails and mollusks (with the notable exception of schistosomes); one species is the cause of swimmers itch and the other the cause of a debilitating human disease.

The parasitic worms burrow through the guts of their unlucky host and hijack the reproductive tract; using the snail’s own machinery to produce millions of horrifying-baby-worm-parasites —often castrating the host in the process. With over 18,000 different species of trematodes, many of which are trying to infect the same host species, the competition can get a little stiff. A snail’s gonads can only hold so many parasites, so what’s a nightmare-inducing, no-anus having worm to do? Well, some species have divided the labor of defending and reproducing to two entirely different physical and behavioral forms, allowing them to divide and conquer in a way unheard of in the worm world. 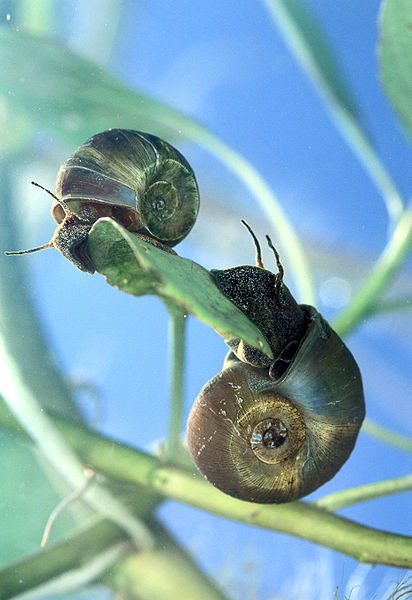 Caste division of labor had previously only been documented in arthropods, sea anemones, and naked mole-rats. The most famous example is probably the honeybee. Everyone is familiar with the term “queen bee”, which refers to a morphologically distinct bee whose sole function is to reproduce and make “worker bees”. The worker bees are all sisters, and they do all of the heavy lifting around the hive, gathering pollen, scaring away any threats to the hive, and taking care of their little sisters as they grow up. For trematodes, the workers are called “mini-rediae” and their only job is to attack other trematodes from different species that are also inside the . The “queen” trematode is called the “cercariae-producing rediae”. Instead of just one “queen” trematode per snail, there are many cercariae-producing rediae; their job is to produce the next stage of the parasite’s life cycle, the free-swimming cercariae that infects the the definitive host.

The confusing part about these systems of labor is that producing only the worker class has to take up energy, energy that is a genetic dead-end since the workers cannot reproduce. According to  the selfish gene hypothesis, which states that the passing on of genes to offspring is important above all else, all of this energy and genetic material is just going to waste! So why would such a wasteful strategy evolve?

It all has to do with increasing the genetic fitness of the whole colony of bees, not just the individual. Because all of the workers are genetically related to each other, by defending the colony as a whole, the workers increase the chance that their genetic material will get passed on, more than if the workers were trying to reproduce on their own.  Scientists believe that this strategy, called the fortress – defense model, arises when there is a lot of competition between different species. . Animals with the fortress-defense model  however use a “divide-and-conquer” approach, where some individuals will do the fighting and the dying while others do the surviving and reproducing. 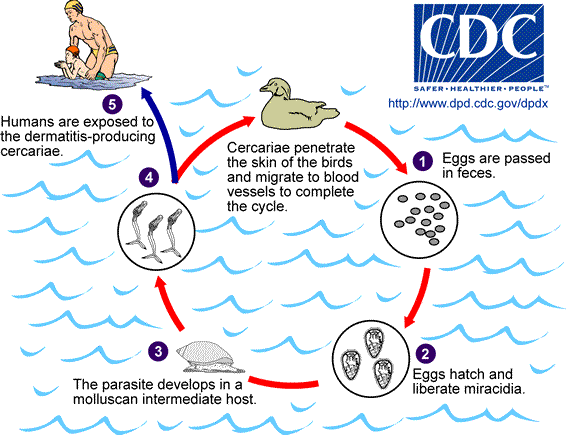 Life cycle of the trematode that causes swimmer’s itch. The mini-rediae(“workers”) and cercariae-producing rediae both exist inside the snail. Image credit: Filip em via Wikimedia commons. Public Domain.

While caste systems are an interesting evolutionary phenomenon, animal models can also provide clues about how other similar systems evolved. One example is the human immune system. Our defenses against pathogenic invaders are relegated to a specific “caste” of cells, and the  trematodes are analogous to the macrophages that recognize “non-self” cells and consume them. Because there are tens of thousands of trematode species, there are potentially tens of thousands of opportunities for caste systems to evolve, or not. By studying what factors may contribute to the evolution of caste systems in these creepy little worms, we may be able to understand more about how our own immune systems.

Megan Tomamichel is a PhD student in the Odum School of Ecology at the University of Georgia. She studies aquatic disease ecology and is working to understand the causes of deadly disease outbreaks that threaten the world’s fisheries. Her favorite past times are aquarium building, hiking, drinking too much coffee and dreaming up names for future pets. You can reach her at Megan.Tomamichel@uga.edu.