Me, circa 2010, at the now defunct Mediatrax Records. Credit: Used with permission from the author.

Working at a recording studio for a year was the dream job for a fledgling audiophile such as myself. One tidbit that stuck with me was the absolute genius, yet simplicity, in how the songs we recorded could go from electronic signal to audible music. This process occurs all around us and, if your hearing is intact (wear earplugs at concerts, people!), your ears don’t go a day without picking up electronically generated sound. What is the almost ubiquitous device behind all of this noise? The speaker.

Speakers have been around since the 19th century, and with the availability of much more sophisticated manufacturing methods, have become their own science. However, the fundamental mechanism behind their design has remained the same for decades. 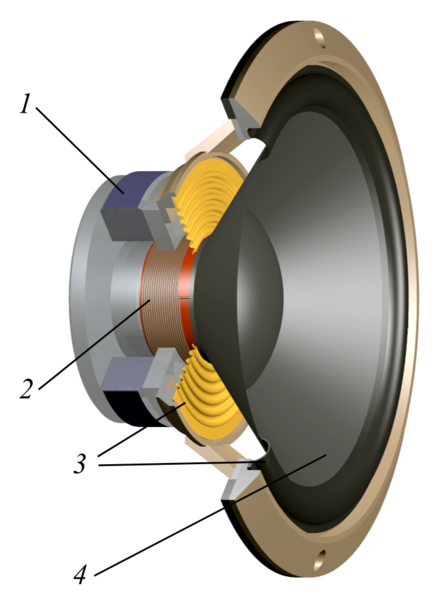 A simplified look at a speaker, showing the core components. (1) The Magnet. (2) The Voice Coil, a coil of wire that acts as an electromagnet. (3) The Suspension, to provide support and fix the orientation. (4) The Diaphragm, a stiff cone that helps dampen and push the sound outwards. Image credit: Svjo via Wikimedia Commons (CC BY-SA 3.0).

The process starts with a powerful, permanent magnet that is fixed in place and generates a magnetic field. Next, the electrical signal of the song you wish to hear will be fed to the voice coil. As alternating electrical pulses move through the coil, it will generate its own magnetic field, which will interact with the magnetic field of the permanent magnet. Because the coil is suspended it will vibrate based on the signal being passed though. This is probably hard to visualize, but think about what you already know of magnets: they can either attract or repel each other. Because the coil is within the magnetic field of the permanent magnet, it will move based on the alternating current being fed to it!

Connected to the coil is the diaphragm, which accentuates the small movements of the coil and pushes them out, forming the sound of your song. This acts much like our vocal cords, vibrating the air passing through to produce sounds.

These pieces are kept in place by the suspension system, which retains the orientation of the coil and diaphragm, ensuring the movement is only back and forth, as well as keeping the coil suspended and free for interaction with the magnet.

When you listen to a song, you don’t hear a single frequency being pushed out by the speaker, you hear all the instruments and their tones played in unison. Take a chord for instance. A chord is multiple notes played together, but we hear it as a single, harmonious sound.

The constituents of a single chord as shown by their frequency (Hertz, Hz). The notes are each a single tone with an individual sine wave that combine. This same principle is happening, but on a much grander scale for songs! A Fourier transform would be this, but in reverse. Credit: Used with permission.

The deconstruction of sound to its simplest parts is accomplished through Fourier transform, where a mesh of signals can be analyzed to determine the individual frequencies that make it up. You can think of it like taking a bite of a sandwich and being able to taste all the ingredients that went into making it.

The way a Fourier transform works mathematically involves taking a signal and applying several filters to parse out the strength of each component, based on the frequency. Keeping with the sandwich analogy, it’s removing parts of the sandwich until every ingredient is separated from one another. Remarkably, the cochlea of the inner ear has specialized cells that vibrate based on the frequencies of incoming sound, sending a signal to release neurotransmitters based on how they move. In short, evolution has provided us with a living Fourier transform!

An interesting aside, different speakers are specialized in producing certain ranges of sounds. Woofers, so named for the deep “woofs” of dogs, are designed to better handle the lower octave range of music, and thus are delegated those signals in a sound system. Tweeters, named for high-pitched “tweets” of birds, would be the ones responsible for the higher octave frequencies.

While this is only scratching the surface of audio engineering, I hope it will get you started wondering about the widespread piece of technology that very well may be in your ear right now. Jam on, friends.

Jeremy Duke is a Biochemistry and Molecular Biology PhD student at UGA, focusing on glycoconjugate vaccine development. He has a wonderfully eclectic music taste and likes to make costumes and read when there isn’t a pipette in hand. He can be contacted at jad71457@uga.edu. More from Jeremy Duke.